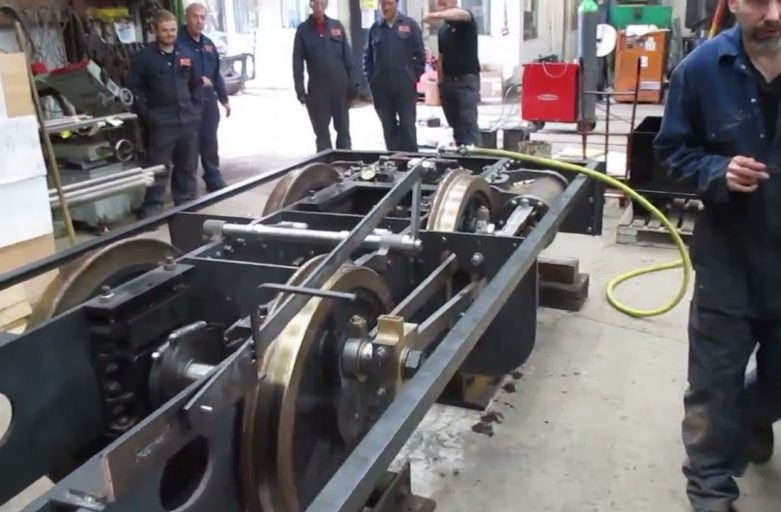 A major landmark in the progress of the new build Corris Railway steam locomotive, Falcon No. 10, was reached in the week ending June 25th when the wheels and motion moved for the first time. This significant event took place courtesy of compressed air, and some temporary pipework fittings, at the workshops of Alan Keef Ltd near Ross-on-Wye. Video of this can be seen at www.corris.co.uk Some further fine tuning was required but all went well on the first run.

The project has already had its boiler constructed by Israel Newton, and other components constructed or ready for finishing include the smokebox and its fittings, buffers and chimney. Volunteer input to the project has also included work on brake gear components, and the pony truck for the 0-4-2ST. Cab components have been produced. However there is more construction to be done and components including cab fittings to be purchased, many of them distinctly expensive to obtain. The Corris wishes to thank everyone whose financial support has seen this progress made.

The new steam locomotive will be the second to enter service on the revived section of the oldest narrow gauge railway in Mid Wales, situated in the beautiful Dulas Valley between Machynlleth and Dolgellau. No. 10 is a 21st Century evocation of a trio of engines built in 1878 at the Falcon Works in Loughborough. One of these is now Sir Haydn on the Talyllyn Railway. The new build will differ from the originals in some respects, most notably a higher cab to accommodate drivers and firemen who are taller than their Victorian predecessors. The new cab does however have a similar outline to that carried by the original trio during their time at the Corris.

The target for the completion of the locomotive, subject to continued successful fund raising, is September 2022 when it will appear as the centrepiece of a charity open day at the workshops of Alan Keef Ltd. Subsequently it will enter traffic on the Corris.

Donations for the new engine are welcome and can be made online at www.corris.co.uk or cheques, payable to Corris Railway, can be sent to Peter Guest, 38 Underwood Close, Callow Hill, Redditch, B97 5YS.