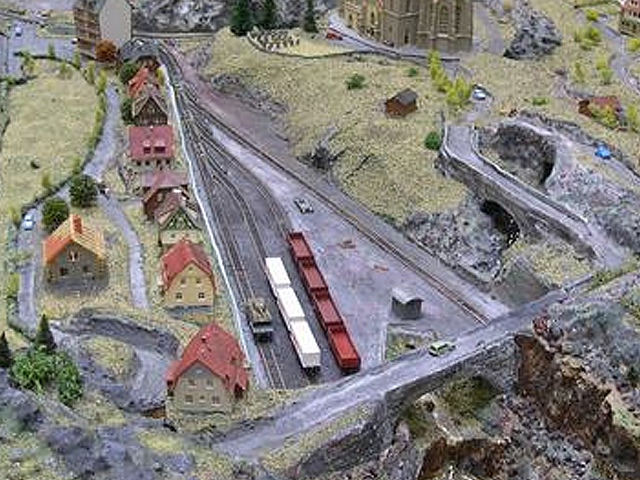 After Covid-19 led to its cancellation in 2020 the Model Railway Exhibition organised by the Corris Railway Society is scheduled to return on August 28th and 29th, the Saturday and Sunday of the Bank Holiday weekend. This is, of course, subject to the degree of pandemic related restrictions then in force.

Organiser Bill Newton has been able to include a number of exhibitors who were scheduled to attend in 2020 and there will once again be a variety of layouts in different scales and filling different amounts of space in the Hall at Y Plas in Machynlleth. The largest will feature 16mm scale live steam locomotives and derives its inspiration from the world famous Darjeeling – Himalaya Railway.

At the other end of the narrow gauge modelling scales there will be two 009 layouts, one of which occupies a minimal space of four square feet. These minimum size layouts have become a feature of the Corris’ Exhibition and another visitor is a GWR layout in the ever popular OO scale which is designed to fit onto a window sill.

Two other OO layouts, one steam era and one featuring diesel locos, are due to appear whilst O gauge will be present with a layout representing the former LNWR/LMS lines in North Wales. Another part of the North/Mid Wales railway scene will be represented by an N gauge layout including a slate mine, and a further N gauge visitor will depict the North German scene.

Visitors of an older vintage will have toy shop window memories stirred by a Triang TT layout featuring the model range which was in the catalogues between 1957 and 1964. There is a further TT layout due to appear which will also feature vintage equipment from the Margate factory. And as another nod to nostalgia there will be a static display of no less than 50 model lawnmowers.

Trade wise the show will welcome back Nick and Dee Lowe selling railway ephemera and Martin Parry’s huge selection of models both new and second-hand with the majority being OO scale. Kate Packham also returns with her wide selection of jewellery and decorative items made from recycled glass (the organiser’s lady wife usually makes a bee-line for this). The Corris will have a sales stand selling new items relating to the Railway as an extension of the sales counter housed in the Museum building at Corris station where trains should be running along the Dulas Valley on the two days of the Exhibition. A new Corris stand this year will sell a variety of second hand goods, some earmarked for specific projects in the revival of the oldest narrow gauge railway in Mid Wales and some where the purchaser can nominate which part of the project they would wish the purchase price to support.

Refreshments and light snacks are sold and there is a large car park close by. Admission costs £4.00 for adults, £3.50 for seniors £2 for children and £10 for a family (2 adults and 2 children).