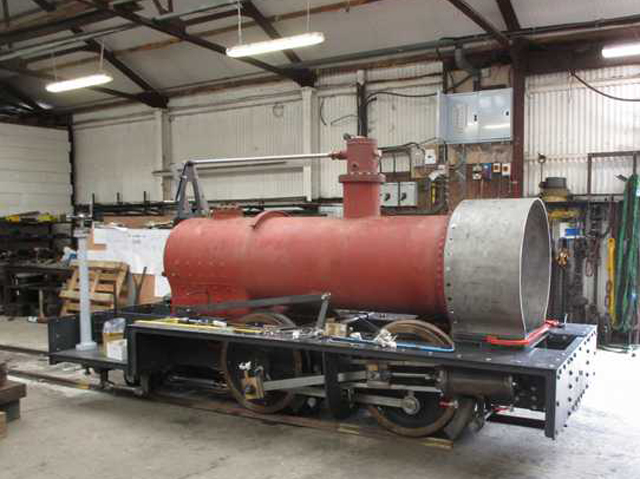 The project working to see a new steam locomotive for the revived section of the Corris Railway in Mid Wales took another very significant step forward when the boiler passed its hydraulic pressure test. The test took place in the last week of July at the workshops of Alan Keef Limited in Lea near Ross-on-Wye although the boiler was constructed by Israel Newton and Sons, then based in Bradford, in 2012. Before being taken to Keef’s in August 2020 it had been displayed at Maespoeth Junction on the Corris Railway as part of the fund raising towards the overall four hundred thousand pounds cost of building the locomotive which will become No. 10 in the Corris Railway’s fleet.

No. 10 is a 21st century evocation of a trio of steam engines built originally for the Corris Railway in 1878 by the Hughes Company in Loughborough. One survives and works on the Talyllyn Railway.

Apart from the boiler testing other important work carried out included the mounting of the control springs for the pony truck and work beginning on fitting the smokebox. With the boiler out of the frames for the hydraulic test it was possible to look to mounting the ashpan, made by Keef’s from a wooden pattern constructed by a Corris Railway volunteer. Volunteer work is continuing with the construction of the saddle tank.

Although the plan is to steam the engine at the end of September as part of Alan Keef’s Annual Open Day on the 24th there will still be completion work to be done in order for the locomotive to enter Corris Railway service in 2023. This will include such tasks as fitting the buffers and sanding gear and of course painting, followed by delivery to the loco shed at Maespoeth Junction. This work is estimated to cost forty eight thousand pounds with the Corris Railway still needing to raise twenty thousand pounds to reach this target.

As a further incentive to see No. 10 completed and in service next year, 2023 will mark the 140th Anniversary of the introduction of steam services to the Corris Railway, headed by the trio of locomotives which were the ancestors of the new-build engine.

Donations for the new engine are very welcome in order to meet the timescales and can be made online at www.corris.co.uk or cheques, payable to Corris Railway, can be sent to Peter Guest, 38 Underwood Close, Callow Hill, Redditch, B97 5YS. Peter is also able to provide standing order payment forms. There will be a fundraising stand for the loco at the Corris Railway Society’s Model Railway Exhibition which will be held at Y Plas in Machynlleth on August 27th and 28th.