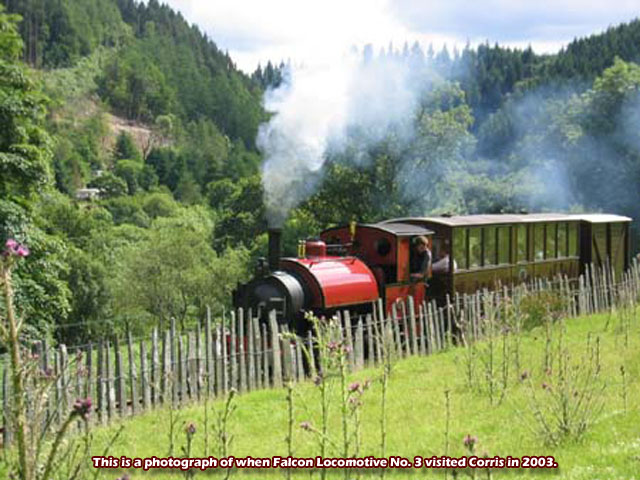 The Corris Railway is auctioning a seat to travel on the first train to be headed by its next steam locomotive when it eventually leaves Corris station for a journey along the Dulas Valley in Mid Wales. The winning bid will also receive an invitation to the rest of the celebrations on the day and an opportunity to join Corris Railway Society visitors to the annual open days at Alan Keef’s workshops where the engine is under construction in Herefordshire.

Sealed bids should be made by Monday October 22nd. On that date the person offering the highest bid will be notified of their success and the other bidders informed with thanks. A minimum bid of £50 is required. Bids should be sent to Corris Railway, 42 Bluebell Close, Taunton, Somerset, TA1 3XQ. The second and third highest bidders will be invited to the first day of number 10’s entering service but may not be guaranteed seats on the first train. Names of bidders will not be publicised unless the bidder requests otherwise.

The auction is part of the fund-raising for steam locomotive number 10, a 21st century recreation of the original locomotives on the line which were delivered from the Falcon Works factory of Henry Hughes Locomotive and Tramway Works in Loughborough in November 1878. The present day Corris already has one steam locomotive at work. This is number 7, a recreation of a Kerr Stuart “Tattoo” class locomotive which arrived on the original line in 1921. The Corris Railway Society is targeting having number 10 running alongside number 7 by 2021 if not before but progress is dependent upon the rate of fund-raising. Currently number 10 is approaching the rolling chassis stage with cylinders cast and at the works ready to be fitted and the boiler and other components have been manufactured and are ready to fit once connecting rods, valves and motion parts are manufactured and in place.