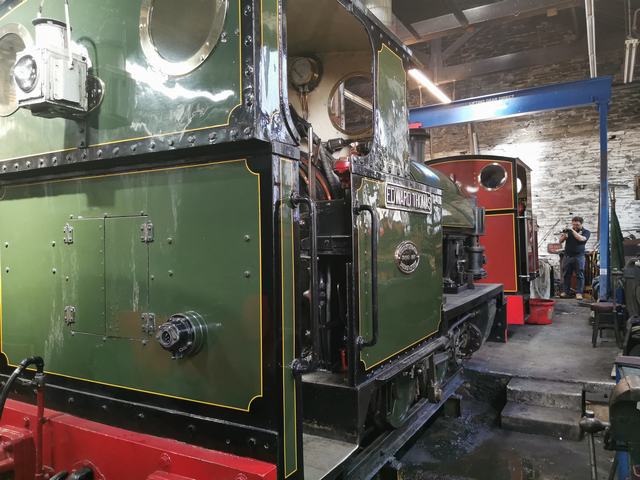 Owing to the events of 2020 and the early part of 2021 the Corris Railway’s Annual Gala Weekend is later this year and will not follow the usual mixture of trains and differing steam and diesel locomotives in action.

However there is an undoubted highlight of the plans and that is a chance to ride behind a steam engine that last worked passenger trains on the Corris in 1930. It is also marking its own centenary.

The locomotive is Corris Railway No. 4, built in Stoke on Trent in 1921. It worked on the line from Machynlleth to Corris and Aberllefenni until it was closed by British Railways in August 1948 and seemed destined for scrapping. However it was kept sheeted over and protected from prying eyes by the Machynlleth stationmaster Mr Campbell Thomas and was eventually purchased by the volunteers who had taken over the Talyllyn Railway and began the heritage railways movement.

Since the early 1950’s No. 4 has been a mainstay of Talyllyn services and has been named Edward Thomas – although it also appears as Peter Sam, the character in the railway books for small children, created by the Reverend Awdry. It has returned to the revived section of the Corris, between the station in Corris itself and Maespoeth Junction, once before but the Corris Railway was not then passed for passenger services and No. 4 headed demonstration freight trains.

In 2005 construction work was completed on a new steam engine for the Corris which is a 21st century version of No. 4.

These two steam engines will be heading passenger trains over the two days which will leave Corris station at 11.00, 12.00, 13.00, 14.00, 15.00 and 16.00. Tickets can be purchased at the station on the day of travel. Passengers will travel in carriages built by volunteers to the original Edwardian layout of those hauled by No. 4 in the 1920’s. The original passenger services ceased in 1930.

The Museum and sales area at Corris station will be open and if enough Corris Railway Society volunteers are available there will be visits to the carriage shed at Maespoeth Junction. There may also be an opportunity to see the work on the southern extension of the line.

Another new steam engine is being built for the Corris, based on a trio constructed for the Corris Railway in Loughborough in 1878. It should enter service in autumn 2022 but this is dependent on fund raising. To help things along there will be a sale of railway books, priced two pounds each. Stock has been donated by supporters of the Corris revival and is augmented by donations of duplicated items from the library of the Historical Model Railway Society.