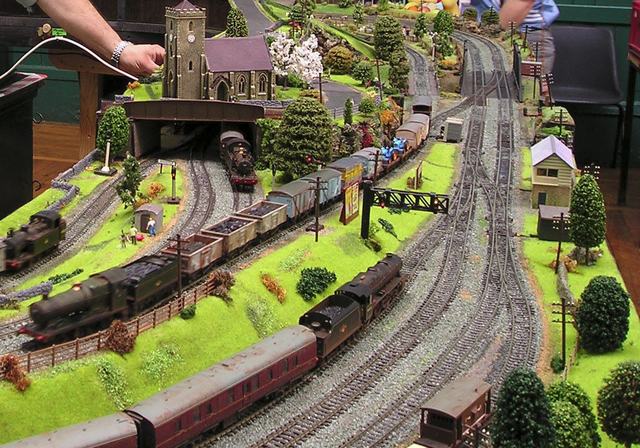 Appropriately enough the Corris Railway Society’s Model Railway Exhibition will feature narrow gauge layouts when it takes place at Y Plas in Machynlleth on August 25th and 26th. Representing the most popular narrow gauge 009 scale will be “World’s End” and “Hensbarrow Road”, whilst the light-hearted “Bumf Mine” is built to 7 mm standards. “Walmer Bridge” flies the flag for the 16 mm scale and demonstrates that smaller area layouts are possible in this “garden scale”.

0 gauge features on four layouts. “The Depot” and “Clough Street Sidings” portray the dieselised railway of today whilst nostalgia for days and toys gone by will be stirred by a visiting selection of Hornby clockwork and electric trains and a layout featuring the 1960’s Tri-ang “Big – Big Train” range.

More Tri-ang nostalgia from half a century ago will be represented by a TT gauge layout and there will be a trio of layouts in N, depicting a North German scene and two with a Welsh theme, “Taste of Amlwch” and “Dora Slate Incline”.

The most popular 4mm scale is represented by three very contrasting exhibits. “Westgate MPD” is based on the one time locoshed at Chester Northgate. An “Underground Ernie” layout features trains from the television series and children are invited to “drive” them. And there will a layout designed to fit into minimum space – in this case a window cill.

Sales stands include a return of the jewellery and decorative items from “Kate’s Glass”, railwayana, new and pre-owned model railway equipment, and of course fund raisers for the revival of the Corris Railway including the construction of the new “Falcon” steam locomotive and a Corris Railway Sales Stand.

Trains will be running from Corris station on the re-opened section of the Railway on Saturday 25th, Sunday 26th, Monday 27th and Tuesday 28th August.