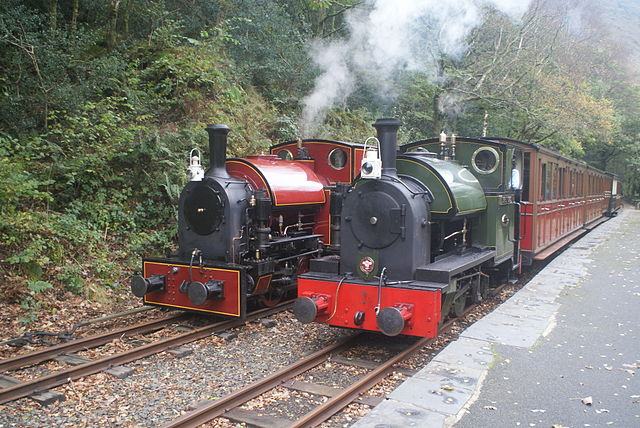 Subject, as all events in 2021 must be, to possible pandemic enforced changes, Saturday August 28th will mark another landmark in the revival of the Corris Railway. At 11.00 steam locomotive No. 4 will head its first passenger train from Corris station since 1930. Further trains headed by No. 4 will leave Corris station at 13.00 and 15.00. Tickets must be pre-booked via www.corris.co.uk/tickets

This historic moment is part of the celebrations of the engine’s centenary year. By 1921 the Corris Railway’s original trio of steam locomotives had been working for four decades in the Dulas Valley north of Machynlleth and were becoming time expired. To deal with the problem a new engine was ordered from Kerr Stuart Limited in Stoke-on-Trent whilst the best parts of the original trio were combined by Albert Hulme, the CR’s engineer, to produce a single locomotive. This retained No. 3 and the new engine became No. 4. The remains of Nos. 1 and 2 were scrapped whilst Nos. 3 and 4 worked passenger, slate and general goods traffic between Machynlleth and Aberllefenni. No. 4 was a Modified Tattoo class locomotive, a design dating from 1904.

In 1930 the Great Western Railway took over the Corris and at the end of the year passenger traffic ceased to run. Freight continued, although services were eventually reduced to three days a week, and the narrow gauge line became part of British Railways in 1948. In August of that year the railway was closed as the River Dyfi was threatening to breach the trackbed near Machynlleth.

The Corris was built to the unusual gauge of 2 feet 3 inches and the pair of engines looked destined to be cut up in short order. However Mr. Campbell Thomas, the Machynlleth Stationmaster, hoped that they might be found new life on the neighbouring Talyllyn Railway which shared the gauge. To this end the locomotives were kept sheeted over and as far as possible out of sight.

In 1948 the Talyllyn was being kept alive by its owner Sir Henry Haydn Jones and he felt unable to purchase either. However after Sir Henry’s death the TR was taken in hand by enthusiasts and became the world’s first heritage railway in 1951. With only one working engine of their own the pioneers were, after negotiations with British Railways in Swindon, able to purchase the Corris locomotives for a new life at Tywyn.

After overhaul by the Hunslet Company in Leeds No. 4 entered Talyllyn service in 1952 and has been a major part of train operations there since.

It has returned to Corris once before, in 1996. At that point the revival of the Corris had not reached a point where it could carry passengers but No. 4 worked demonstration freight trains which lifted the CR’s profile and was part of the launch of an appeal to build a new locomotive based on the Tattoo design. That appeal was successful and No. 7 began to work in the Dulas Valley in 2005.

After its first trains on the Corris on August 28th No. 4 will work alongside No. 7 during a Gala Event that will see them operating passenger trains between Corris and Maespoeth Junction on September 4th and 5th. Details of this and booking arrangements will appear at www.corris.co.uk

During the following weekend September 11th and 12th both No. 4 and No. 7 will be in action on the Talyllyn Railway.