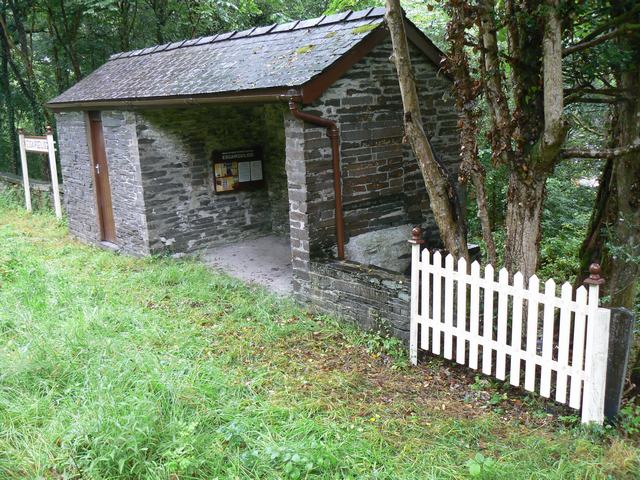 Esgairgeiliog railway station was once served by trains on the Corris Railway in Mid Wales but the last passengers to use its platform made their journey on the narrow gauge railway in 1930. That was the year in which the Great Western Railway acquired the Corris and withdrew the passenger services. Freight lasted into the start of the British Railways era but the last train ran in August 1948 and the tracks were subsequently torn-up. However the station survived, finding a new use as a bus stop on the A487 and serving the local residents.

The station has been restored as a joint project between local government and the Corris Railway Society and is today clearly identifiable as a former railway station. Society members carry out regular routine maintenance ahead of the day when the trains return as part of the ongoing work which is bringing the CR back to life in the Dulas Valley. The next working party will take place on Saturday July 7th.

Other work towards reviving the line will be going ahead in the workshops at Maespoeth Junction on the same date and some of the station working party may move on there once their tasks at Esgairgeiliog are complete. Trains will also be operating between Corris railway station and Maespoeth Junction at hourly intervals between 11.00 and 16.00 and the Railway’s Museum and Shop at Corris station will be open between 10.30 and 17.00.