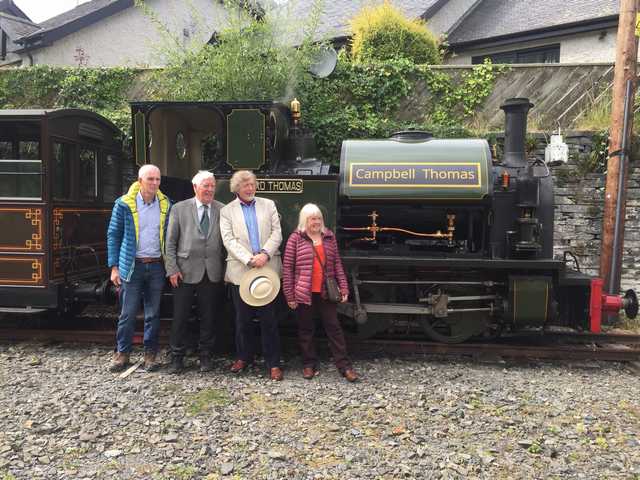 The Corris Railway’s Gala over the weekend of September 4th and 5th was notable for the brief return of the former Corris Railway steam locomotive No. 4, now based on the neighbouring Talyllyn Railway and named Edward Thomas. Until this short stay in its original haunts the centenarian, a Tattoo class locomotive built by Kerr Stuart in Stoke on Trent in 1921, had not headed a passenger train from Corris station since 1930. The visit was to mark the locomotive’s centenary and it carried a suitable birthday headboard.

The visit of the locomotive also brought some welcome visitors whose parents and grandparents had worked on the Corris before its closure in 1948. Selwyn Humphreys is the son of Humphrey Humphreys who was the last regular driver – and fireman, as he did both jobs amongst others – on the line, working from the locomotive shed at Maespoeth Junction where No. 4 was housed during its return. Elizabeth Humphreys, Humphrey’s sister, was the final station mistress at Corris.

The Corris Railway’s mechanical engineer in the 1920s when No. 4 was delivered was Albert Hulme who performed or arranged work on the locomotive to ensure that it worked reliably after initial problems. Not to mention a mishap when the original chimney was damaged in a collision with an overhanging branch or structure. Clearly a first class engineer he was also responsible for amalgamating components of the original trio of Loughborough steam engines built in 1878 into one locomotive which, numbered 3, worked with No. 4 until the Corris line was closed by British Railways. Sadly he seems to have lost his job when the Great Western took over the Corris in 1930 and returned to his native Manchester.

Albert’s grandsons David and Stephen came to the event where they met Mrs Jackie Jeffery whose grandfather Thomas Squire worked with Mr Hulme on the Corris in 1926, when he lived in Esgairgeiliog, served by the next station down the line from Maespoeth Junction.

After the Corris closed in 1948 it would have been logical for the two steam locomotives to have been quickly reduced to scrap metal but the station master at Machynlleth, Mr Campbell Thomas, hoped that they might have a future life and kept Nos. 3 and 4 sheeted over in the goods yard at his station, away from prying eyes. Had it not been for the actions of Mr Thomas it is unlikely that No.4 would have survived to the age of thirty, let alone seen its centenary. After three years under his care, they were purchased by the Talyllyn Railway in 1951, where they have served ever since, helping to establish the Talyllyn as the world’s first heritage railway. Without the two Corris locomotives it is unlikely that the Talyllyn preservation project would have succeeded, and the history of railway preservation might have been very different.

To recognise his role in the birth of railway preservation No. 4 was temporarily renamed Campbell Thomas and this was done in the presence of Chris Magner whose book The Saviours of British Railways Narrow Gauge Railways tells the tale of how Mr Thomas and other BR officials helped to conserve and preserve locomotives and infrastructure of Mid Wales narrow gauge lines including the Welshpool and Llanfair and the Vale of Rheidol.

After the Gala Weekend No. 4 was to return to the Talyllyn for a Gala Weekend on September 11th and 12th which will further mark its centenary and the 70th anniversary of the Talyllyn’s revival. It will be accompanied by Corris No. 7, a 2005-built version of the same Kerr Stuart Tattoo class.