First Use Of The Traverser At Corris Station 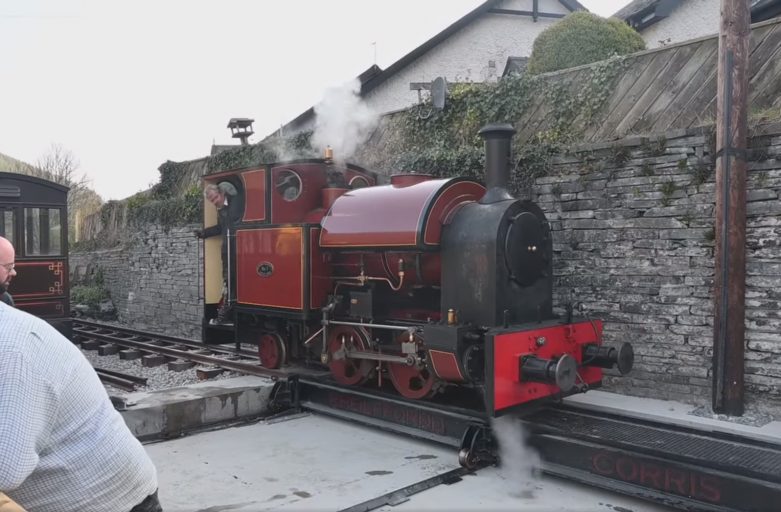 Saturday March 26th was another significant date in the revival of the narrow gauge Corris Railway and the recreation of Corris Railway station when the new traverser was used for the first time to allow a steam engine to run round a set of passenger carriages. This will be a regular feature from the Easter weekend when the line begins its 2022 passenger services.

The first locomotive to be moved on the traverser was the Ruston and Hornsby 4-wheel diesel hydraulic No. 6 having worked a ballast train to Corris station and which already holds a place in Corris history as having worked the initial passenger trains after re-opening between 2003 and 2005. In the latter year the revived Railway took delivery of its first steam locomotive.

Having passed a live steam test after annual maintenance the Corris’ Tattoo 0-4-2 saddle tank locomotive took a train of carriages from Maespoeth Junction to Corris where, after uncoupling from the train, it ran forward onto the newly installed traverser on which it was moved to the new run round loop track. It then ran in reverse to the other end of the coaching stock before the train returned to the Junction.

The traverser was constructed by Statfold Engineering, based near Tamworth in Staffordshire. In use at Corris it is manually operated. Its installation will allow locomotives to be at the head of their trains in both directions on the Corris for the first time since 1948 when the original line closed.

The station rebuild is part of ongoing work to revive the oldest narrow gauge railway in Mid Wales. The original Corris station was demolished in 1968.

Because of present day site restrictions it is not possible to completely recreate the former station as it was but the new structure will eventually include an overall roof, a feature that made its predecessor an iconic part of the British narrow gauge scene.

After this latest phase of the work is completed further progress will require considerable funds to be raised via donations and, if they can be obtained, grants.

Donations towards the station project can be made online via www.corris.co.uk or cheques payable to Corris Railway can be sent to Corris Railway, Station Yard, Corris, Machynlleth, SY20 9SH.