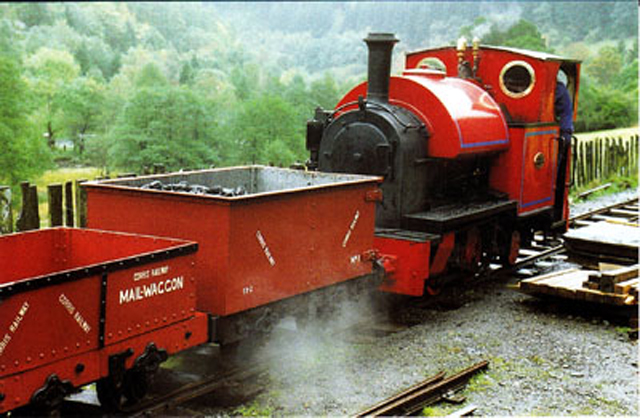 The Corris Railway is planning to hold its 2021 Gala over the weekend on May 8th and 9th and the undoubted highlight will be the chance to see, and travel behind, Corris Railway No. 4 working its first passenger trains between Corris Station and Maespoeth Junction since 1930.

No. 4 is a Kerr Stuart “Tattoo” 0-4-2ST built for the Corris Railway in 1921 and it worked on the Machynlleth-Aberllefenni line until it was withdrawn in 1948. Shortly afterwards the Corris Railway Line, apart from the horse worked Ratgoed Tramway, closed in August of that year. Passenger services had ceased at the end of 1930 after the Great Western had acquired the 2 foot 3 inch narrow gauge line. Fortunately the locomotive was not reduced to scrap after withdrawal and after being stored in the yard at Machynlleth Station alongside the other extant Corris engine (Hughes 0-4-2ST No. 3 of 1878) it was purchased and moved to the Talyllyn Railway in 1951. Since 1952 it has been a mainstay of Talyllyn operations.

As the revival of the Corris has progressed No. 4 has made one visit to its original haunts but as the Corris Railway was not then passed for passenger trains it worked demonstration freight trains at the head of some surviving Corris waggons kindly provided by the Talyllyn. This was part of the launch of the appeal to fund the build of a 21st Century “Tattoo” for use on the Corris Railway. The new locomotive, No. 7, entered traffic in 2005.

Further events will take place on the Talyllyn with No. 7 making its second visit to the Talyllyn where amongst other attractions it will be joined by a further “Tattoo”, “Stanhope”.

The Corris Railway did not run any passenger trains during 2020 because of Covid-19 but plans are being produced to allow at least a basic service to operate in 2021 with time to clean and sterilise trains between trips. Depending on restrictions this may begin at Easter. Further information will be circulated and will appear on the website. Ticketing arrangements are also being worked on.