Progress At The Corris Railway – August 2021 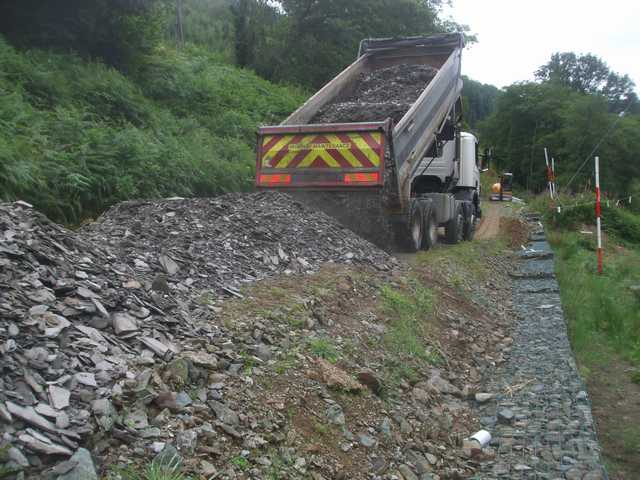 As the year moved from July into August the Corris Railway was able to take further deliveries of stone and material for the construction of the embankment, necessary for the extension of the revived section of the narrow gauge railway southwards from Maespoeth Junction in the Dulas Valley.

An additional source of this is the work which is getting underway to build a new road bridge over the River Dyfi at Machynlleth. Although the stone is not required as part of the bridge works it does accrue costs including transport when acquired and used by the Corris.

As ever with the new embankment, made necessary by part of the original railway trackbed having been lost during improvements to the A487, the pace of works depends upon the weather in the Dulas Valley being favourable for construction and financial contributions towards the project. Payments for The Southern Extension can be made online via www.corris.co.uk or cheques, payable to Corris Railway, can be sent to The Corris Railway, Dept SE, Station Yard, Corris, Machynlleth, SY20 9SH.

The volunteer workforce of the Corris have done further work on the next new build carriage, the clerestory roofed number 24, which is being constructed in the carriage shed at Maespoeth Junction with an initial fitting of the wooden lower side panels. The volunteers are also continuing with restoration and construction of vintage waggons and the next to be built will be a recreation of one of the distinctive trestle waggons which once moved slabs of slate from the quarries for transhipment to mainline trains at Machynlleth. Another job being undertaken in the workshops is the making of brake gear components for new build steam locomotive number 10, which is planned to enter traffic towards the end of 2022.

Volunteer work is also underway with work on the ground frame which will control points as part of the new station trackwork at Corris. The work to produce the new track layout, which will include a traverser to allow locomotives to run round their trains, and a new station platform, is planned for the first quarter of 2022.