Progress At The Corris Railway – October 2021 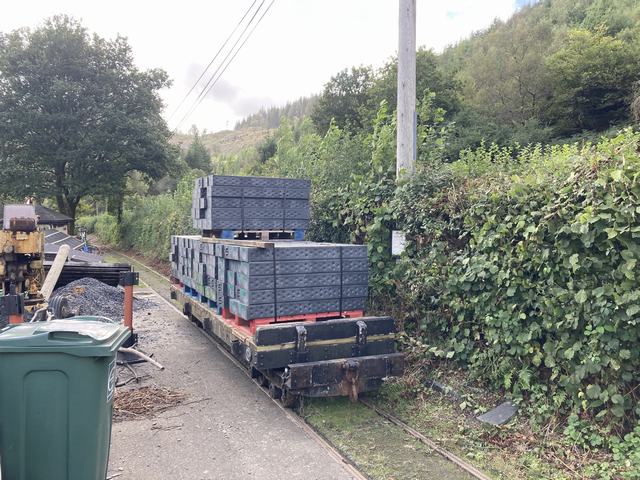 With only a few weeks left of the 2021 Operating Season remaining, apart from a planned weekend of Santa Trains in December, Corris Railway Society volunteers are continuing to work on the revival of the Mid Wales narrow gauge line and looking forward to a major winter project.

This is the new track layout and station platform at Corris. A traverser is being constructed by Statfold Engineering which, together with a new point being installed to complete a loop, means that locomotives will be able to run around their trains at both Corris and Maespoeth Junction. Refurbishment of the ground frame is in progress in the Maespoeth Junction workshops and new sleepers have been delivered, as well as track fittings. The modified layout will require the building of a new platform as part of a larger scale and longer term intention to build a new Corris station including an overall roof. Such a roof was a feature of the original station in the village.

Work on the new track layout will begin after the two days of Santa Trains operation which will take place on December 11th and 12th. Santa train tickets can be purchased online from www.corris.co.uk

The dry and warm weather through most of September allowed more construction work on the embankment which will replace a lost section of the original trackbed south of Maespoeth Junction and eventually allow trains to run further southwards along the Dulas Valley. Material continues to arrive from Dolgellau. Important work completed also included connecting the drainage layer below the embankment base with a drain to the Dulas, clearing the flood plain of debris from earlier site work and levelling of the topsoil in front of the stone filled gabions at the base of the embankment. Work has also been done by a flail tackling the vegetation which had grown strongly on the steep sided slope of the valley.

New build carriage number 24, which will offer First Class accommodation and an observation section, is being worked on in the carriage shed at Maespoeth Junction with the flooring complete and hardwood sections being fitted to the outside of the vehicle.

Donations to assist with the work at Corris station and/or the Southern Extension embankment can be made online via www.corris.co.uk or cheques payable to Corris Railway can be sent to Corris Railway, Station Yard, Corris, Machynlleth, SY20 9SH. Please indicate for which work a cheque donation is intended.