Progress On The Corris Railway – August 2018 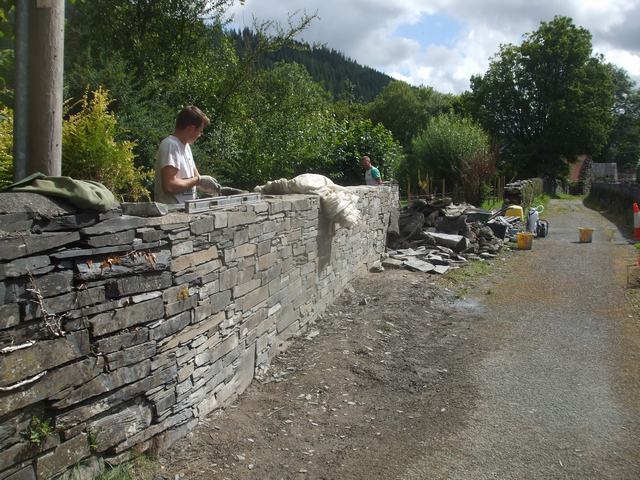 Progress continues on several fronts with the revival of the Corris Railway. During the August holidays the opportunity was taken to move the wall of the village school in Corris as the first stage of developing the station area. This will be followed by moving the boundary of the station site as a prelude to creating a run round facility, which with the limitations of the station site area will incorporate a traverser. This will allow locomotives to head all trains rather than propelling in one direction as is current practice. The use of the traverser is necessary because the station site is shared with the village car park.

Following the roof work carried out on the former stable block building at Corris, which currently houses the railway museum and shop, windows have now been replaced. Some of those replaced have proved salvageable and will be put to use in the future. Meanwhile inside the carriage workshop at Maespoeth Junction more panels for carriage number 23 have been delivered from members’ home workshops and are being fitted as part of the ongoing construction work. A heritage waggon has been stripped down for restoration and a van has been refurbished. Station fencing at Maespoeth Junction is being repaired and repainted, an ongoing task in the Mid Wales climate.

Construction of the new steam locomotive, “Falcon” number 10, has taken another step forward with machining of the pony truck wheels and manufacture of the axle. As a guide to the costs of loco building these 12 inch diameter solid wheels are costing £350 each, the axle £540 and four bearings £52 each. The pony truck has already been manufactured in the workshops of two volunteers but main construction work is being carried out at Lea, just outside Ross on Wye approx. 23 km SE of Hereford, in the workshops of Alan Keef Ltd. Alan Keef Ltd. will be holding an “Open Day” on Saturday 22nd September 2018 where progress of all projects, including the Corris Railway Falcon locomotive, can be seen and viewed at close quarters. The “Open Day” will run from 11:00am to 4:30pm with all proceeds going to a local charity. More information can be seen here.