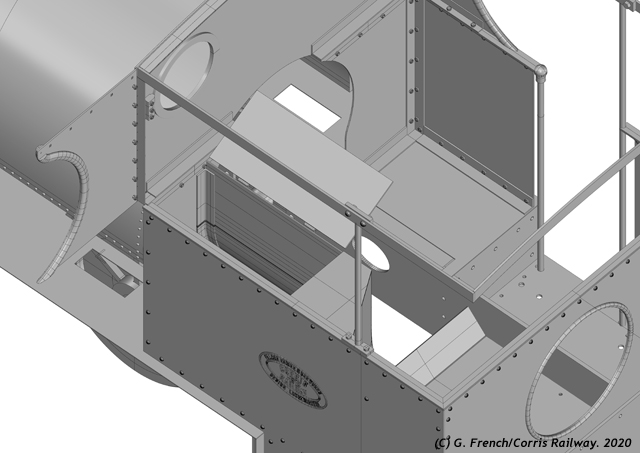 As progress continues with the erection of the “ bottom half” of the new build Corris Railway “Falcon” 0-4-2ST No. 10 at the workshops of Alan Keef Ltd design work of another major feature is nearly complete ahead of quotations being obtained for the cutting of the metal.

This is the cab for the locomotive which will follow the general design and appearance of that carried by No. 3 in the part of its time on the Corris but will stand taller than that in order to accommodate 21st Century footplate crews. It will have the coal bunker inside the cab, unlike the arrangement which No. 3 now has at Tywyn, and to accommodate this whilst allowing for ease of coaling at Maespoeth Junction there will be a hinged upper cab side sheet on the left hand side. Work has been done at the design stage to make this as visually unobtrusive as possible.

In addition the upper part of the cab back sheet will be removable. This will make life more comfortable for the driver and fireman on hot days and will of course allow passengers in the front compartment of a Corris carriage, with their all- round visibility, a view of the working of the engine. (The Corris Railway coaches were quite effective Victorian/Edwardian observation carriages and this is a feature of the 21st Century recreations). It will also be removable for filming purposes.

Volunteer work for the new loco also continues on the newly cast brake blocks and brake column. In another volunteer’s workshop construction of the smokebox hinges and work on the baffle plate is underway.

When the locomotive is in service it is intended that it will run around its train at the new Corris station by means of a traverser as the area does not allow provision of a headshunt. This will be an unusual and interesting feature when in action.

This will cost £8,000 and a grant towards this work had been obtained. Unfortunately the funding body has had to reduce this to £2,000 as they sought to spread their resources across other railways affected by the pandemic leaving a large shortfall for the Corris to try to fill before being able to move forward with the new track layout and platform arrangements.

Donations towards both the “Falcon” and “Corris Station” funds can be made online via www.corris.co.uk. Alternatively cheques can be sent to Peter Guest, 38 Underwood Close, Callow Hill, Redditch, B97 5YS for the locomotive or to Corris Railway, Station Yard, Corris, Machynlleth, SY20 9SH for the Station Fund (cheques should be payable to Corris Raiway and please indicate for which purpose they are payable).

My Tickets is currently in testing mode. No financial transactions will be processed.