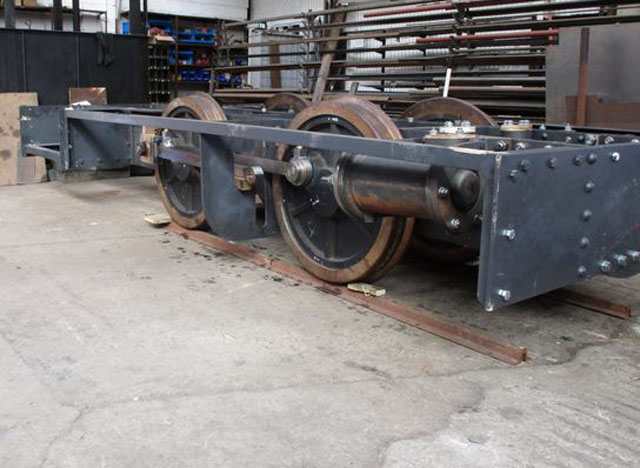 Having announced a target of £44,000 to complete the bottom part of its new steam locomotive, so that it can be demonstrated working by means of compressed air in September 2020 during the Open Day at Alan Keef Ltd, the Corris Railway is pleased that funds are now in place to complete the outside motion. This work will cost £8,000 but the next major steps to complete the inside motion and its assembly between the frames of the 0-4-2ST require a further £22,000 so major income is still being sought. Donations can be made online via www.corris.co.uk or cheques payable to Corris Railway, sent to Peter Guest, 38 Underwood Close, Callow Hill, Redditch, B97 5YS.

Looking at other areas of the project it is estimated that a sum in excess of £30,000 from the final overall bill will be saved by reason of Corris Railway volunteers constructing some parts of No. 10, a 21st century version of one of the “Falcon” locomotives that served the Corris in its independent, GWR and BR days. Following a meeting at Alan Keef’s at the end of November 2019 it has been agreed that a team of volunteers with engineering skills and facilities will construct the brake gear, smokebox, bunker and cab. The cab will have a profile similar to that of the original engines, aided by parts of the original from No. 3, which are on display in the workshops at Maespoeth Junction, that can serve as templates. However the cab will stand somewhat taller to cope with larger 21st century footplate crews. The visit to Keef’s also saw the pony truck complete with trailing wheels delivered to the works following construction and assembly by Corris volunteers. As the Maespoeth workforce are also engaged in carriage and waggon construction plus maintenance work on other locos and rolling stock more hands will be very welcome and they should contact volunteering@corris.co.uk as a starting point.