Volunteer Work Input As Work Continues On “Falcon” No. 10 For Corris Railway 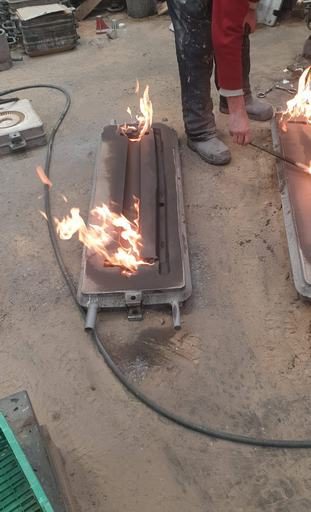 Despite disruptions and some “stop/start” episodes inevitable in the Covid 19 affected world of 2020 work has continued with the construction of the new Falcon locomotive 0-4-2ST for the revival of the Corris Railway.

Following the movement of the boiler and smokebox components to the workshops of Alan Keef Limited near Ross-on-Wye these are now in position to be mounted when work on the chassis, motion and valve gear is completed. At the start of November the castings for the eccentric sheaves and eccentric straps had been machined. This was part of component production including:-

Away from the Keef’s workshops Corris Railway Society volunteers have been progressing work on some components. An East Midlands member, Ian Cross, has produced patterns for the brake blocks and the brake stem in his home workshop. These have been cast at the Manor Foundry in Ilkeston at the start of November and will be taken to Ross in due course for final machining as required. These components have cost £800. Steel has been delivered to the Maespoeth Junction workshops where other engineering volunteers will produce the brake gear.

In the middle of November CAD drawings for the new cab were completed by Graham French and this will be manufactured by CRS volunteers. The cab will have an outline similar to that of the original trio of “Falcons” in their final form on the Corris. But will be taller than the original to accommodate 21st century footplate men who are physically larger than their predecessors who drove and fired locos in the Dulas Valley between 1878 and 1948.

As always the date of the entry of No. 10 into traffic in the Dulas Valley and on the extended section of running line depends on the rate of fund raising. Online donations can be made via www.corris.co.uk or cheques payable to Corris Railway can be sent to Peter Guest, 38 Underwood Close, Callow Hill, Redditch, Worcestershire, B97 5YS