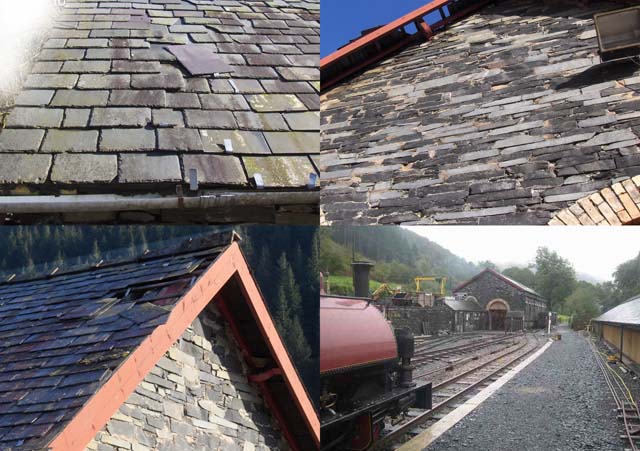 In January 2013 the Corris Railway was awarded a grant of £27,100 from the Heritage Lottery Fund to restore the west pitch of the roof on its 134 year old engine shed at Maespoeth as well as re-roofing the adjacent former stable and signal and telegraph store in its entirety, in use today as a volunteers mess and small museum. The money also went towards interpreting the history of the building by providing display boards along with the recording of interviews with the local community to be shown on screens in the stable museum. Maespoeth is currently the southern end of the revived section of the line, and all locomotives are stored and maintained in the building.

The Engine Shed at Maespoeth, less than a mile south of the village of Corris on the edge of the Snowdonia National Park, was built in 1878 when steam locomotives were introduced to the railway the same year. It is unusual in that it currently houses one of the original locomotives for which it was built. The line ran through a steep sided valley and the site of the shed was very much dictated by the topography of the route. Maespoeth was originally a junction where the Upper Corris Tramway branched northwards to serve quarries north-west of Corris. The main Machynlleth to Dolgellau road runs in close proximity to Maespoeth and the engine shed is a very visible structure, providing a visual advertisement for the railway.

Work started on the re-roofing within a few weeks, in time to safeguard its interior from the worst of the Winter weather. Wherever possible the original slates that are in good enough condition were re-used. Visitors to the railway will be provided with displays and interpretation boards giving information into the sheds history along with the work done to its roof. The main re-roofing was undertaken professionally, however the preparatory work as well as interpreting the project was undertaken by the railway’s volunteers.

Andrew Cooper, the project spokesperson said; “We are delighted that the Heritage Lottery Fund has given the Corris Railway this grant, it will safeguard this unique and important building for future generations of visitors and volunteers alike. It allows the full potential of the building to be utilised for the railway’s operations, and thus allow us to complete our projects in a better environment.”

Jennifer Stewart, Head of Heritage Lottery Fund Wales, added: “Our industrial and transport past is an important part of Wales’ heritage. We are pleased that Heritage Lottery funding will not only safeguard the Grade II listed Maespoeth Engine Shed and adjacent buildings for their continued use but will also enable volunteers to improve the interpretation offer through new display boards and information packs.”

Notes to Editors
Using money raised through the National Lottery, the Heritage Lottery Fund (HLF) sustains and transforms a wide range of heritage for present and future generations to take part in, learn from and enjoy. From museums, parks and historic places to archaeology, natural environment and cultural traditions, we invest in every part of our diverse heritage. HLF has supported more than 33,000 projects allocating over £4.97 billion across the UK, including more than 2,000 projects totalling over £240 million in Wales. To find out more, please visit www.hlf.org.uk.