The Falcon Locomotive.
Thank you for your interest in the project to bring our next steam engine to the Dulas Valley. Below you will find a history of the project to date but before reading further we would like to draw your attention to an upcoming anniversary. In 1921 the Corris Railway took delivery of steam locomotive No. 4, a Kerr Stuart “Tattoo” class. Our No. 7 is a 21st century recreation of the “Tattoo”s. From 1921 to the closure of the Corris in 1948 trains were worked by “Falcon” No. 3 and No. 4. We would love to be able to recreate those days of a century ago by completing No. 10 to work beside No. 7. Your support to bring this closer will be much appreciated.

What sort of locomotive would we have?
To build another Tattoo might be considered sensible because the design had been accepted by HMRI, but the opportunity to build a locomotive which would closely resemble the original Corris No.3, a Falcon, although fraught with difficulties, was an opportunity not to be missed. To have an appropriately modernised replica of a Falcon would be an advantage to give the railway variety in motive power. Our photo charter friends would love it, the visual display would be more satisfying than two identical twins and it would improve the profile of the railway as a national tourist attraction.
After a poll of the CRS members the decision was taken in the spring of 2007 to build a replica of No 3.

Lack of plans for No 3.
The builder of Corris locomotives 1, 2 & 3 delivered in November 1878, was the Hughes’ Locomotive & Tramway Engine Works, Loughborough. It eventually became part of the Brush Electrical Machines Ltd, Falcon Works, Loughborough and still exists today. The researcher George Toms assured the Society that no plans exist of the locomotive. To obtain drawings the extant locomotive at the Talyllyn Railway had to be surveyed (with permission).

Appointment of design & build consultants.
Reluctantly our Tattoo Locomotive consultant, Colin Blackwell, had decided for family reasons to take a back seat with regard to the Falcon Project. Fortunately Graham Morris, our boiler inspector, agreed to take responsibility for the project along with a colleague of his, David Potter. In August 2008 they began work on producing drawings by visiting the museum at Corris and then travelling on to Pendre, Tywyn to meet David Scotson (Chief Mechanical Engineer) and John Bate (former Chief Engineer) of the Talyllyn Railway. So began the complicated task of surveying the locomotive and producing drawings. This lasted for nine months and in September 2009 the drawings were complete at a cost of £26,000.

Funding.
Society members were encouraged to make a gift aided one-off donation or donations by standing order and by November 2008 the fund had reached £22,000. Nineteen members had taken out standing orders. Since then members have been encouraged to sponsor parts of the loco and an updated list of parts is included below including some that can be sponsored retrospectively. Anybody taking out a Standing Order of £20 or more a month for a period of 30 months will receive a limited edition print by Jonathan Clay.

Manufacture of the Locomotive.
The decision was taken in 2009 to make the boiler the first item to be built and our two consultants obtained a suitable quote (one of several) from Israel Newton, a 200 year old firm of boiler-makers in Bradford, for £31,250.00 plus VAT. Click here to see this being reported in the Bradford Telegraph and Argus.

Progress to date.
The boiler was completed by Israel Newton and was brought to Maespoeth in the late summer of 2012. A good number of other smaller components were also produced. Once the boiler was received the next move was the cutting of the main frame plates for the locomotive which was done using the water jet method to produce the outside profiles and also all holes needed for bolts and rivets. The frame plates, were taken to the workshops of Alan Keef Ltd in Herefordshire for erection.

The driving wheels on the Corris “Falcons” as built in 1878 are unusual for a small narrow gauge tank engine by being larger than the norm at 30” diameter and being solid with spokes cast on (rather reminiscent to the onlooker of the original Tri-ang model railway locomotives of the 1950’s). By way of contrast the wheels on the trailing pony truck which converted the original 0-4-0ST’s to 0-4-2ST’s with a view to making the original trio of engines ride more steadily were very small with a 10” diameter, but No. 10 will have slightly larger ones of 12” diameter. The wheel centre castings for the driving wheels were produced and drilled ready to accept axles and crank pins at Keef’s workshops. Steel tyres were produced in South Africa and were fitted to the driving wheels in November 2017.

The axleboxes and bearings were produced and fitted to the frames and two Corris volunteers with engineering skills constructed the pony truck and delivered it with wheels in place I to Alan Keef’s.. Cylinders were cast in Wolverhampton during 2017. They were machined in May 2018 which took the project closer to the “rolling chassis” stage. A generous individual donation paid for the casting and machining of the cylinders, plus production of the cylinder covers. Motion parts were being manufactured to be fitted in the narrow area between the frames and a further individual donation helped towards production of the connecting rods. It was estimated that the manufacture and erection of coupling rods and the motion had cost £53,000. Once the motion, including the gear in the narrow area between the frame plates is the frames area can be united with the boiler after the smokebox has been constructed. It has been agreed that the smokebox will be constructed by Corris volunteers.

Steam engines, even small ones like No. 10, are expensive items to build and once these stages of the construction have taken place it will take expenditure to date to over £200,000. Another £50,000 to £70,000 will be needed to complete the construction and the time taken until the engine leaves the Alan Keef workshops and commences work in the Dulas Valley will be determined by the rate of fund raising.

As at the end of September 2018 the driving wheels were in the frames and the trailing truck wheels machined along with their axle ready to join the pony truck. Further components that had been produced and were at Alan Keef’s were as follows:-

In addition to the components above, Keef’s had finish machined the axleboxes, fitted the bronze wear plates and fitted them to their respective hornguides. That had allowed the wheelsets to be finish fitted and dropped into the frames. They had also set up a datum wire line for the centreline to set up the alignment of the cylinders and wheelsets. The expansion links and die blocks were being manufactured by a wire-erosion sub-contractor.
The above steps come to a total cost of £29,315.00 plus VAT. The axlebox completion and wheelset fitting was previously offered at £5,500 and the coupling and connecting rods at £12,000.

In mid-October 2019 Keef’s quoted a sum of £44,000 to complete the locomotive to the “rolling chassis” stage with the hope that this could be seen operating under compressed air at their open day in September 2020.

In November 2019 a meeting was held between representatives of the Corris Railway and Alan Keef’s and it was agreed that Corris volunteers would construct some components for the locomotive including the cab and brake gear while work continued on the “underneath” of the engine at Keef’s. Work by CR volunteers will reduce the cost of the overall construction by over £30,000. This volunteer work will include construction of the cab and bunker as well as the smokebox. The cab will have an outline similar to that originally fitted to the “Falcons” but will stand taller to accommodate 21st century footplate crews.

The next stages for the loco, and the best way of maintaining the current momentum were judged to be as follows as at November 2019:-
Crossheads and Slidebars:- The slidebars and mounting brackets for this element were completed, and Keef’s were awaiting the castings for the crosshead body. These would need machining, gudgeon pins machining to suit, and a set of bronze slippers machining to suit. All components would need assembly onto the cylinders and motion brackets. This would effectively complete the outside motion.
Outstanding Budget Cost: £7,500 – £8,000.

Inside Valvegear:- There was already a significant collection of components completed or near completed. This included expansion links and die-blocks, valve spindle components and guide bushes, along with part completed eccentric rods. The major elements outstanding were the eccentrics and straps, weighshaft, bearings and links and reverser lever, quadrant and reach rod. All components would need to be assembled onto the driving axle and frame. This would complete the inside valvegear.
Outstanding Budget Cost: £21,000 – £22,000.

Pistons and Valves:- To this date, rather less had been completed in this area, the valve spindles were part completed, and Keef’s were awaiting the valve castings. The piston heads were part machined. All these elements would require completion, plus machining of new piston rods and setting of ‘bump’ clearances, supply and fitting of piston rings. All components would require assembly, along with new cylinder gaskets, and final setting of the valves.
Outstanding Budget Cost: £8,000 – £8,500.

Brakegear:- No work had been undertaken on this element. As previously discussed, this is relatively ‘low-tech’ element which Corris volunteers could potentially undertake ‘in house’, which would only require final assembly and fitting
Potential Cost with Corris Input: £2,500 – £3,000.

Draincocks and linkage:- Again much of the linkage components, brackets etc. is a ‘low-tech’ element with potential for Corris to undertake in house. Keef’s would then undertake assembly and fitting of the modified commercial valves and pipework.
Potential Cost with Corris Input: £2,000 – £2,500.

To complete all of the above would effectively achieve the ‘holy-grail’ of a fully rolling chassis that could potentially be demonstrated running on compressed air. Only the buffers and drawgear would remain outstanding.

Your support would be very welcome if you feel able to click in the donations icon for one of the individual components listed below. Some of these are for parts that have already been manufactured but donors will be able to specifically identify “their” contribution and the money raised will take the project forward. But we do value ALL donations, small or large, so if you would like to help please go back to the main page of the site and click on the appropriate icon there. Thank you in anticipation of the day when the sound of a “Falcon” 0-4-2 saddle tank can be heard again in Dyffryn Dulas.

Donations paid by cheque towards the construction of No. 10 can be posted to 38 Underwood Close, Callow Hill, Redditch, B97 5YS. Cheques or postal orders payable to Corris Railway. Peter can also provide standing order forms for those who would like to make regular payments towards completing No. 10.

There are some sales items available from our web shop that specifically contribute towards the fund raising for No. 10. These include an enamel badge featuring the loco surrounded by the Corris Railway garter and the poster and postcards from the painting by Steve Butts.

SUPPORT THE FALCON LOCOMOTIVE FUND TODAY TO FURTHER SECURE THE FUTURE AND HERITAGE OF THE CORRIS RAILWAY IN THE 21ST CENTURY.

If you would like to make a general donation to the Falcon Locomotive Appeal Fund by credit card or PayPal then please click on this button.

Various parts of the locomotive are already being fabricated and the initial set of parts for which sponsorship is being sought are as follows: 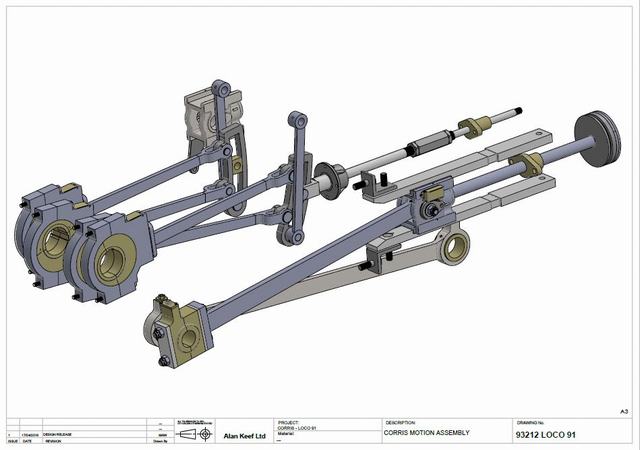