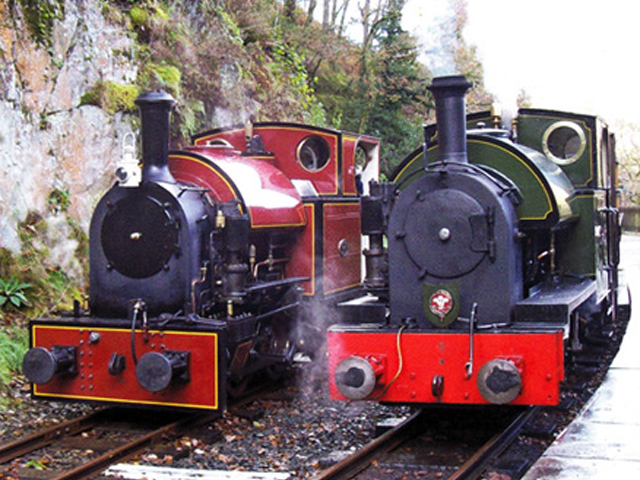 With the Governmental announcements regarding plans for the easing of Covid-19 lockdowns the Corris and Talyllyn Railways have rescheduled their 100th Anniversary Gala events for Kerr Stuart locomotive No. 4 from May to September.

The Corris Railway’s Gala Weekend will move from May 8th & 9th to September 4th & 5th.

The Corris Railway had intended beginning its 2021 operations at Easter with crew training refreshers and examinations taking place in March, following no public train services between Corris and Maespoeth Junction in 2020.

However many of the Corris volunteers stay in local hotels and bed and breakfasts when working at the Railway and with Mid Wales accommodation providers not scheduled to open until Easter the training will take place in April. The Corris Railway management felt it unwise to begin the season with a weekend of intensive operation and the need to follow safe distancing in play. Public services, with pre-bookable tickets will begin in May.

The Gala Weekend will be part of the return visit of the original Corris Locomotive No. 4 “Edward Thomas” to its original line and will be the first time that it has headed passenger trains there since 1930. It will work a mixture of passenger and freight trains over the two days of the event in company with the Corris’ own No. 7, a 2005 recreation of the 1921 design. (historical information about the locomotives can be seen below).

Following the Corris Gala Nos. 4 and 7 will make the journey to Tywyn for a special birthday event on the Talyllyn Railway on September 11th and 12th. The Railways hope to be able to announce further dates when the locomotives will run before September 17th when No. 4 is due to be taken out of traffic for statutory boiler work.

Ticketing arrangements will be announced in due course and are dependent on progress with the combatting of the pandemic. Announcements will be made via www.corris.co.uk and the Corris’ Facebook page.

No. 4 is a Kerr Stuart “Tattoo” 0-4-2ST built for the Corris in 1921 and it worked on the Machynlleth to Aberllefenni line until it was withdrawn in 1948. Shortly afterwards the Corris Railway Line, apart from the horse worked Ratgoed Tramway, closed in August of that year. Passenger services had ceased at the end of 1930 after the Great Western had acquired the 2 foot 3 inch narrow gauge railway. Fortunately the locomotive was not reduced to scrap after withdrawal and, after being stored in the yard at Machynlleth station alongside the other extant Corris engine (Hughes 0-4-2ST No. 3 of 1878) it was purchased and moved to the Talyllyn Railway in 1951. Since 1952 it has been a mainstay of Talyllyn Railway operations.

As the revival of the Corris has progressed No. 4 has made one visit to its original haunts in 1996 but as the Corris Railway was not then passed for passenger trains it worked demonstration freight trains at the head of some surviving Corris waggons kindly provided by the Talyllyn Railway. This was part of the launch of the appeal to fund the build of a 21st Century “Tattoo” for use on the Corris. The new locomotive, No. 7, entered traffic in 2005.