Progress At The Corris Railway – June 2022 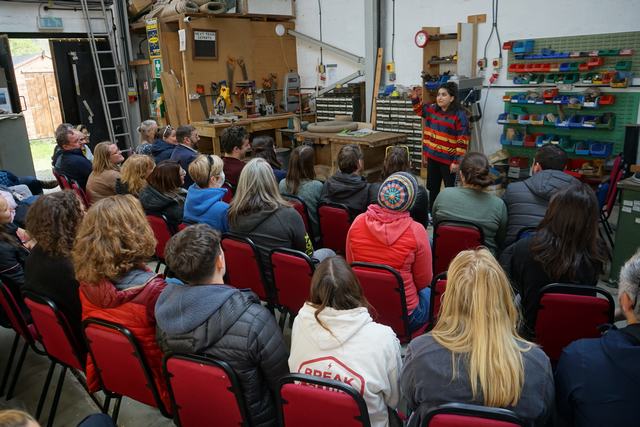 Although the Corris Railway is not hosting many special events in 2022 it was pleased to be a venue during the Machynlleth Comedy Festival once again. The Festival is one of the largest of its kind in Britain and performers bring in both established material and works in progress, many being developed for the Edinburgh Fringe Festival. Once again a full train of the audience and performers travelled from Corris to Maespoeth Junction where the gig took place in the carriage shed before regular services began. Thanks go to the Corris Institute for provision of the chairs for use in the shed.

With the traverser now in use at Corris station train services are operating on Saturdays during the earlier part of the season with more dates of operation in the main season and during Bank Holidays.

Meanwhile in the workshops at Maespoeth Junction work has continued on rolling stock with roof boards added to new build clerestoried roof carriage number 24 and glazing is underway. Offsite work for carriage 24 has included work on a tip-up seat which when tipped will leave space for a wheelchair.

A team continues progress with the trestle waggon and Permanent Way van 221 is receiving attention. It is one of a pair of vans acquired as War Dept. surplus from Trecwn in 2005 and after nearly two decades of use for permanent way service work was needed. The floor has seen its planks replaced courtesy of a donation from a working member. For an interim period it will have two dumb buffers and two spring buffers but eventually it will have a complete quartet with springs. Screw couplings will also be fitted.