Smokebox Rolled And Smokebox Door Formed As Work Continues On “Falcon” No. 10 For Corris Railway 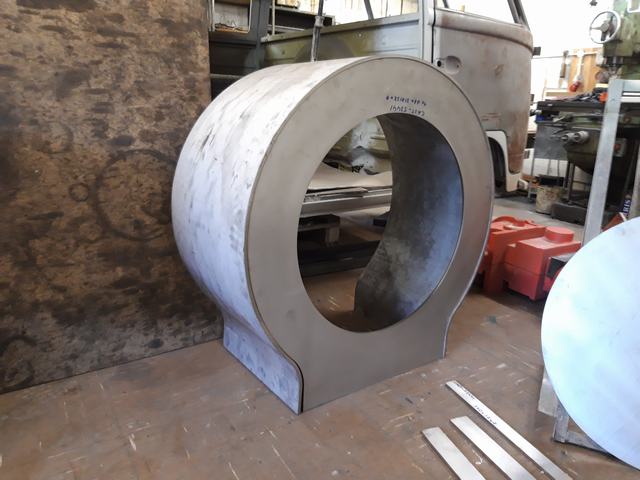 Construction work on the new steam locomotive for the Corris Railway “Falcon” No. 10 has taken some significant steps forward as the “bottom half” at Alan Keef Ltd near Ross-on-Wye continues, with work on the valve and running gear ongoing.

During May the stainless steel smokebox was formed at Barnshaws Plate and Section Rollers in Bilston with a section cut from its front which will act as the baffle plate behind the smokebox door in due course.

The smokebox door “dish” was produced in June by Purdie Dished Ends of Bradford and this extended the links between the West Yorkshire city and the Corris as the boiler for No. 10 was built by Israel Newton at an early stage of the new locomotive project. This was prior to the relocation of Newton’s to the Peak District.

The smokebox and door have cost over £1400 to produce but the construction of the smokebox will allow the boiler to be moved with it to Keef’s workshop when the work currently in progress there is completed. Without the smokebox the boiler could not be erected in the frames.

In another part of the project work on CAD drawings for the saddle tank and cab has been progressing. The cab’s appearance will resemble that of the originals carried by the 1878 built “Falcon” trio of engines of the Corris but will stand higher to accommodate 21st Century footplate crews.

As always the date of the entry of No. 10 into traffic in the Dulas Valley and on the extended section of running line depends on the rate of fund raising. Online donations can be made via www.corris.co.uk or cheques payable to Corris Railway can be sent to Peter Guest, 38 Underwood Close, Callow Hill, Redditch, Worcestershire, B97 5YS.

My Tickets is currently in testing mode. No financial transactions will be processed.