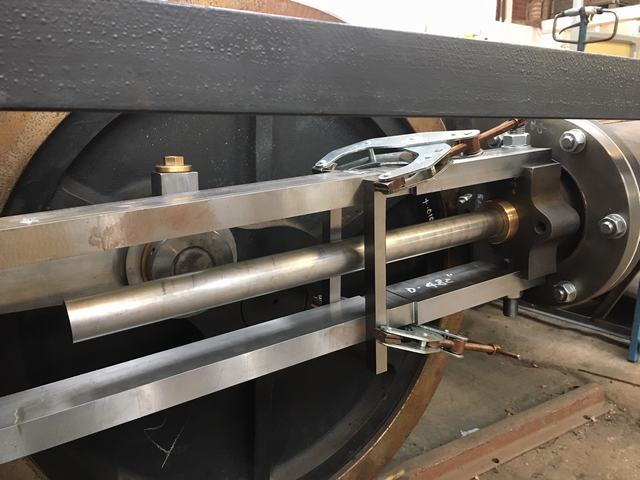 Following the departure of the boiler and smokebox of the new build “Falcon” 0-4-2ST from the carriage shed at Maespoeth Junction work will soon be getting underway there on the brake gear for the locomotive. This will be carried out by two or three of the team who have previously made brake components for the carriages constructed in the workshops at the Junction. Meanwhile another Corris Railway Society volunteer will be working in the East Midlands to produce patterns for the brake blocks and the cast iron brake stand to support the shaft and handle. This work will save money as construction proceeds.

Meanwhile in late August at Alan Keef’s workshops near Ross-on-Wye, as the boiler and smokebox were arriving, work was continuing on the motion for the “Falcon”. Castings for the eccentrics had arrived from the foundry and the crossheads had been trial fitted. Most recently the righthand sidepiston rod was in place so that the slide bar alignment could be checked. Once the slide bars have beenfinally aligned and bolted the crosshead slippers would be machined to suit. The valve buckles had beenexternally machined and some weeks earlier sent away for the insides to be wire cut out.

Thoughts are now turning towards other fittings and offsite work is underway also on the Salter Spring Balances which will control the safety valves in due course.

Discussions are ongoing about boiler fittings for the loco. Some are straightforward but others requirecareful consideration so that the parts which will not only do the job well but also look right. Theaim is to put together a definitive list so that best prices can be sought.

The work being carried out and the raw materials required for it are of course consuming funds and donations will be gratefully received. These can be made online via the “Falcon” section of the website www.corris.co.uk or cheques payable to Corris Railway can be sent to Peter Guest, 38 Underwood Close, Callow Hill, Redditch, Worcs, B97 5YS