Winter work on the Corris Railway 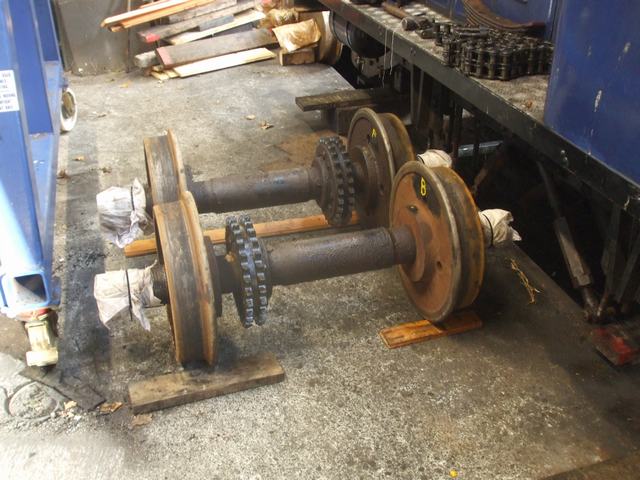 After running its annual Santa Special trains in the snows of mid-December the Corris Railway’s volunteers have continued with maintenance and building work ahead of the resumption of passenger trains over Easter weekend 2018. Ruston Hornsby diesel locomotive number 6 (works number 518493) is having its wheels and transmission worked on. Since arriving at the Corris in 1996 and after re- gauging from 2’ 6” to the Corris’ 2’ 3” it has been a stalwart of the operational fleet, working passenger trains until the arrival of “Tattoo” 0-4-2ST number 7 and deputising for the steam engine on occasion since, as well as heading many works trains. An area of concern is the wheels where it is hoped that there will be enough metal to allow re-profiling by the Vale of Rheidol workshops. Should new tyres be required there is likely to be considerable delay in getting number 6 back into traffic and more reliance will have to be made on diesel number 11.

Construction of two new bogie carriages continues inside the workshops at Maespoeth Jnc. Cedar roof boards have been fitted to number 23 and coated with sealant and the outer panels are completed with beading added. Internally the lower panels under the seats are in place. The bogies for number 23 have been completed and painted. Work is also continuing on clerestory carriage number 24.

Outside in the Dulas Valley tree clearance work has been carried out by contractors on part of the planned Southern Extension route at Pont Evans, adjacent to the A487 trunk road. Track maintenance work days on the existing running line are planned for February 10th and March 10th. More volunteers for this, and all other areas of the revival of the Corris, will be welcome and anyone interested in joining the unpaid workforce is invited to contact Patrick Jolley on 01654 702954.

Away from the Railway construction work on the new steam engine number 10 has been helped by some further components being sponsored via the website and a large individual donation.

And looking ahead the Corris will be holding a Gala Day on May 27th and its annual Model Railway Show at Y Plas, Machynlleth, on August 25th and 26th.