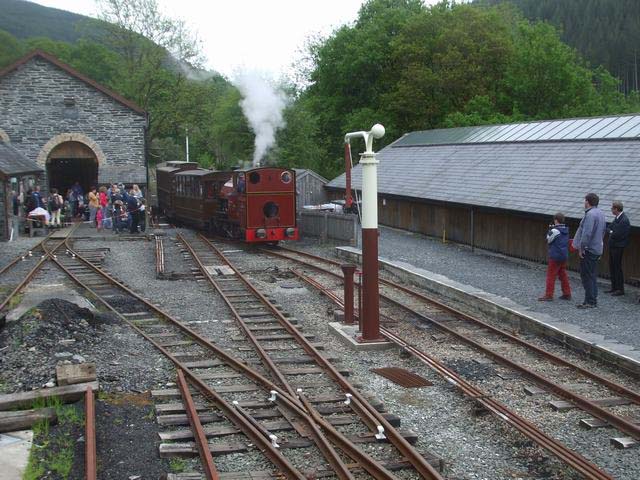 The Corris Railway held its second Spring Gala Day on Sunday May 28th with a variety of trains in action between Corris station and Maespoeth Junction.

Passenger and van train services were handled by “Tattoo” 0-4-2ST number 7, Ruston Hornsby diesel number 6 and Orenstein and Koppel diesel number 11. The first locomotive to work during the revival of the Corris Simplex number 5 “Alan Meaden” worked demonstration works trains and Clayton battery electric number 9 “Aberllefenni” could be found in its usual role of carriage shed shunter at Maespoeth Junction. Visitors could also see components for steam locomotive number 10 (currently under construction as fund raising permits) at Maespoeth Junction. Beyond Maespoeth Junction the extended section of track, the first step on the southern extension of the line, could be observed.

Two unusual forms of passenger traffic appeared in the workings. There was a chance to ride in brake van number 204, recreating the era between 1930 and 1948 when passengers were carried, often without official sanction, in the brake van of goods trains. And Corris Railway Society members were able to take part in the running of a gravity train.

The Railway’s Museum and Shop was open at Corris station throughout the day and the weather was kinder than it often is in the Dulas Valley.